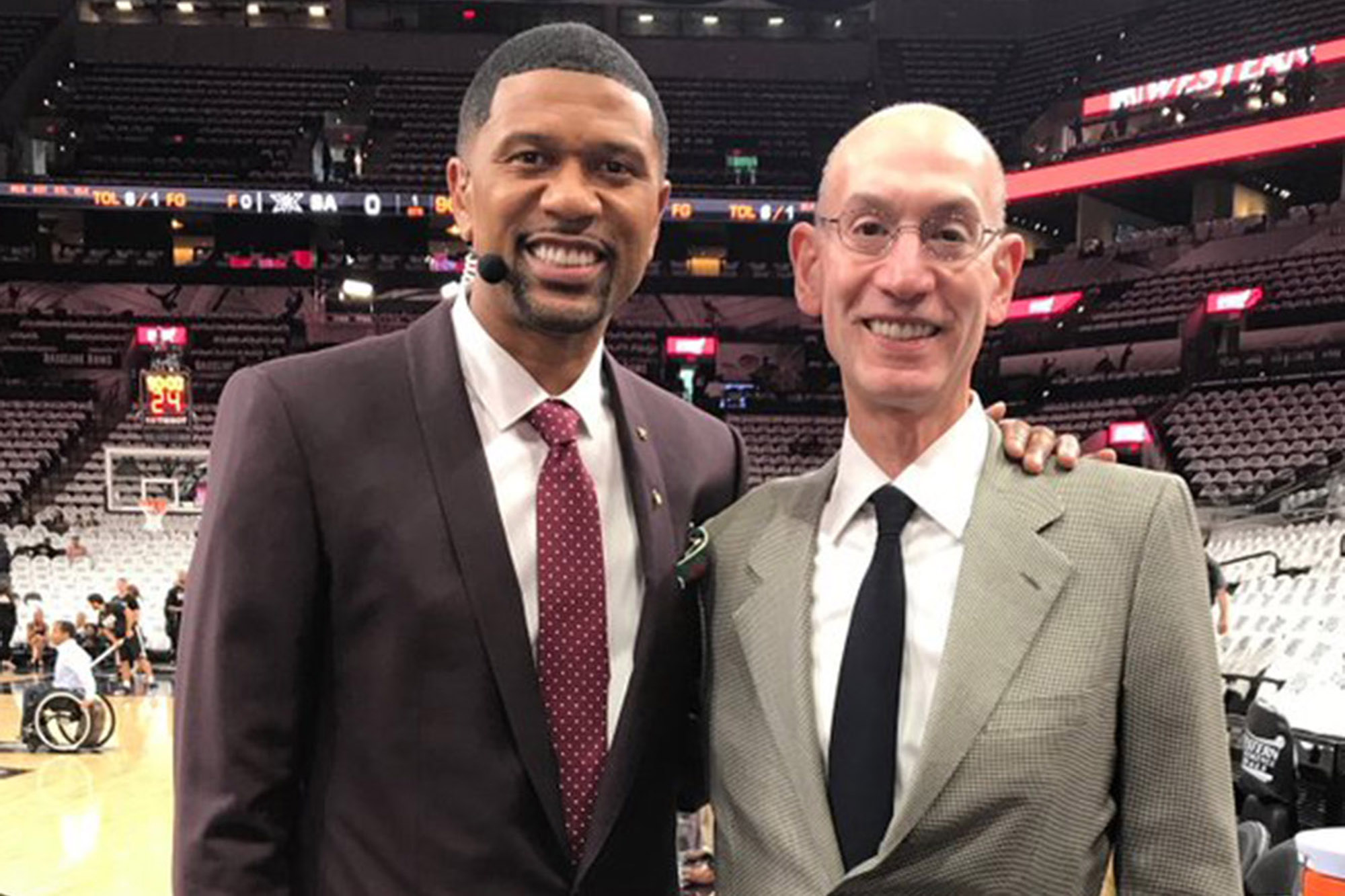 You may know Adam Silver as the commissioner of the NBA, but I like to refer to him as a magician, who, after what he pulled off last season, should have a Vegas residency.

How else can you explain this: He oversaw the NBA bubble, which allowed teams to finish the season, have playoffs and crown a champion — all without one positive COVID-19 case inside the bubble. After that, the league packed in a draft and started playing games only 71 days after the Lakers won a championship.

He also did it while responding to the social unrest that was felt so acutely by the players in the league. There were 29 messages on the backs of jerseys, Black Lives Matter was written on the floor, and there was a sense that the league cared not just for its bottom line, but also for its players.

“I think it demonstrated more than ever something that we know by virtue of being around this league for a long time,” he told me. “That’s how multitalented, multidimensional our players really are … I think that with all that was going on, they were able to continue playing basketball at the highest level, which they did down in the bubble. But at the same time, you know, demonstrating how much they cared about their communities and engaging directly on these critically important issues.”

There are a lot of powerful people that you need to satisfy during these charged times including the owners, many of whom not only look different than the players but in many cases hold different political opinions, so with all of the voices in each ear, he was still able to bring a superior product to the market. So scratch that Vegas magician show. Maybe he should be in charge of an international peace process.

But there’s no time for a victory lap. Now that the season has kicked off, Silver has more adversity to contend with, since there will be no bubble but still a threat of COVID-19.

“You know, challenge one, two and three is COVID … in the bubble there were a lot sacrifices being made,” he said. But he is up for it because the truth is, the man just has a passion for the game. He said he first fell in love with hoops as an 8-year-old, and he pushed aside his usual “they’re all my children” kind of diplomacy to admit that Madison Square Garden will always hold a special place in his heart.

“My parents got divorced. I lived outside of New York City, and my dad moved into the city full-time and he bought Knicks season tickets. And that was the activity that I did with my father. I’d take the train in and then go to the Garden with him … I mean, I played as a kid, but I think that’s how I remember those experiences with my father. Even to this day, Madison Square Garden feels special to me for that reason when I walk in there.”

His favorite player was the flashy and still fresh Walt Frazier, and he even had the Puma Clyde sneakers made famous by Frazier.

Much like Mark Cuban has as an owner, Silver has broken barriers as the commissioner. He treats the players like they are partners and family, instead of boss and worker. In the podcast, he refers to Grant Hill, who is part owner of the Atlanta Hawks as his “boss.”

And since I consider him a man of the people, I had to ask something that many friends said Silver wouldn’t answer. But I needed to know who his favorite rapper is. I figure he has the same taste musically as me. One minute I will be listening to some Hall & Oates, pop on some Outkast and then move to Nas. Also, you can’t be around the NBA for as long as he has and not have an opinion on hip-hop. It’s playing in every arena and locker room, so it seeps in by osmosis. His answer, was diplomatic but also informed. He picked Jay-Z, who is a former part owner of the Nets.

Silver talked about what a good job Milwaukee has done to keep Giannis Antetokounmpo, and how he was influenced by his mentors, Disney CEO Bob Iger and of course his predecessor, the late great David Stern. He also riffed on the new coaches challenge rule, which he admitted needs additional tweaking.

And he said that if he could bring a team to any city in the country, it would be Seattle because “I was in this league for many years while Seattle still had a team, and we were all sad … And it still remains a great market. I know I hear from fans of the old Sonics, fans in Seattle all of the time … there is no doubt that when we do turn back to expansion, which we invariably will one day, that Seattle will be at the top of the list.”

But enough business. How does that man keep his bald head so fresh and clean and how often does he put that razor to his dome?

“Not as often as you might think. It doesn’t even grow that fast anymore, so my personal barber has been my wife these days. I’m not going to show you the some of the little marks on the back of my head — about once a week these days.”

So maybe his wife should be on the short list of league MVPs next season.

Detroit native Jalen Rose is a member of the University of Michigan’s iconoclastic Fab Five, who shook up the college hoops world in the early ’90s. He played 13 seasons in the NBA, before transitioning into a media personality. Rose is currently an analyst for “NBA Countdown” and “Get Up,” and co-host of “Jalen & Jacoby.” He executive produced “The Fab Five” for ESPN’s “30 for 30” series, is the author of the best-selling book, “Got To Give the People What They Want,” a fashion tastemaker, and co-founded the Jalen Rose Leadership Academy, a public charter school in his hometown.